Making a Difference on Main Street

Celebrating Marc and Susan Wilson, long time business owners in the Boulevard Business District, who have truly made a difference in Main Street's efforts to revitalize the area. 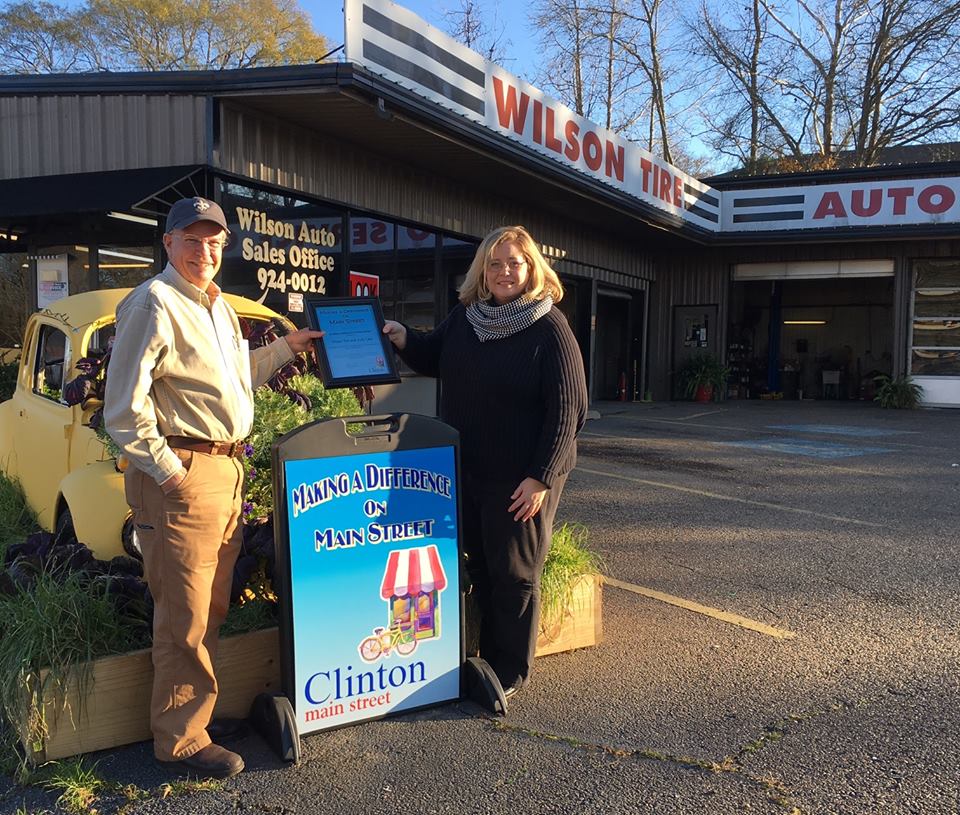 Several years ago, Main Street Clinton decided to look for a way to recognize businesses that were exceptional in some way. The business might offer excellent customer service, may have been in business for a remarkable number of years, or might have made improvements to its storefront that benefit the surrounding area. The Main Street Design Committee decided to create a “Making a Difference on Main Street” award to recognize the efforts of these businesses.

Wilson Tire and Auto Care have been serving Clinton in the Boulevard Business District for 35 years. Owners Marc and Susan Wilson have been actively involved in Main Street’s Boulevard Steering Committee, working hard to build relationships among the other business owners and improve the area. Because of their efforts to bring positive attention to the area through beautification and promotion, Main Street Clinton is recognizing Wilson Tire and Auto Care with the award.

“The Clinton Boulevard district was once a major shopping/service area in our great city. Several years ago we began talking about how our area has changed. We began discussing what we could do to make it aesthetically more pleasing and hopefully continue to be a viable part of the city,” said Susan Wilson. “We have adopted the automobile theme for our area, and artist Wyatt Waters designed a logo for us to help identify or ‘brand’ the district. We began holding the Cruzin’ the Boulevard car show years ago.“

“We brainstormed about ways to introduce planters and green spaces along our streets that incorporated the car theme, and of course we went to Google, where Marc found a picture of a Volkswagen bug that was a planter,” Wilson continued. “It was so unique and eye-catching. He decided to use his many resources to make it happen. He knew a guy that has several old Volkswagens in Raymond, and we had it hauled to Clinton. Our son Adam helped us secure the Volkswagen and build the planter box. Then we began filling it with dirt. Lots of dirt.”

Susan explained the process of creating the planter. “We spent about 3 weeks creating the planter. The hardest part was actually getting the Volkswagen out of the field in Raymond and hauling it to Clinton. The wasps that had made their home in the seats were also very resistant. It was difficult to paint the bug while running and swatting and spraying wasps. The total cost of the project was about $400.00 – 500.00.”

“We have had such great feedback from our planter. It creates positive conversations about our area and about Clinton. Numerous people have actually stopped in the middle of Clinton Boulevard and taken pictures. Our employees have even picked greens out of it and cooked them for dinner. The employees have been a very important part of making the bug happen. They continue to water and trim the greens and decorate it for the holidays. This week we planted tulips and daffodils to come up when it gets warmer. We will continually rotate the decorations and flowers of the bug depending on the season,” Wilson explained.

It is because of business owners like Marc and Susan Wilson, who truly go the extra mile, that we give this award. They exemplify the type of innovative, creative business owners that make Clinton great. Because of their efforts, Clinton Boulevard is a bit sunnier.